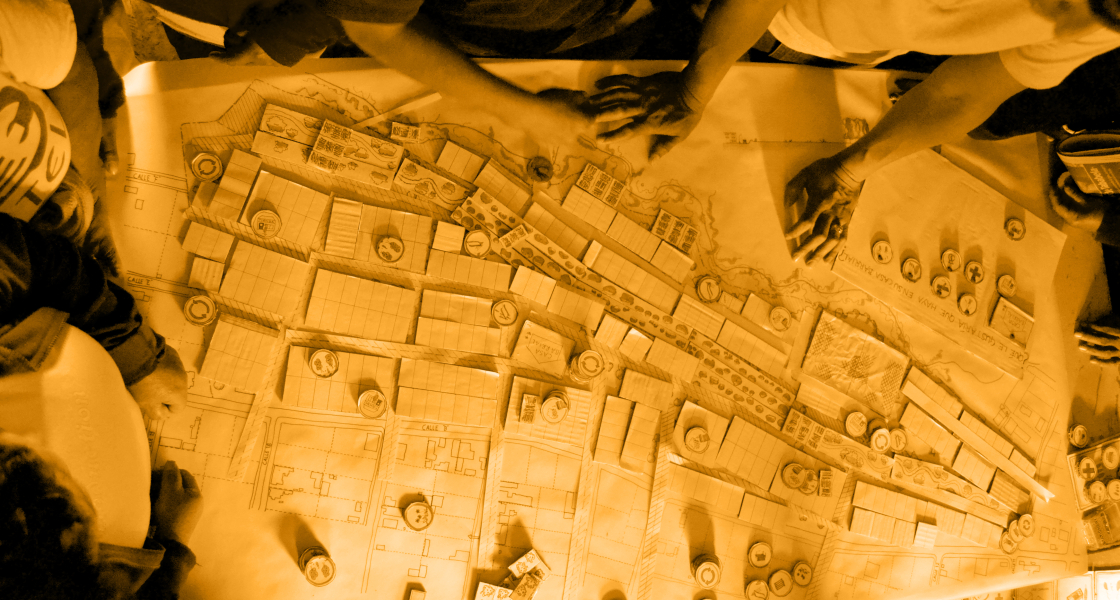 A ‘game’ engaging residents into discussion about the advantages and disadvantages of community scaled implementations. pdf download

Goal: To design a working model of an ‘ideal’ upgraded settlement.

Audience: A representative group (no more than 50 people).

What you need:
– Game kit pieces of varying design
– Maps of varying scale
– Note paper
– Writing pens
– Labels/Post-It notes for annotation where necessary
– A public location to hold the event

Taking the form of a ‘game’ the exercise engages residents on site in planning their ideal upgraded settlement with a kit of parts on a scaled site model. The game can be played in multiple locations, open to all residents who want to participate (group size can include as many as 50 people). Focus groups are set up where appropriate.

Three themes are weaved into discussion; institutional, community and dwelling. One by one, individual elements from the kit are introduced and discussed. Participants debate their benefits and disadvantages. Eventually, a model of an ‘ideal’ upgraded settlement can be created.

The main aim of the exercise is to test responses to specific issues within the much broader context of upgrading as a whole rather than in narrow areas. As the institutional, community and dwelling streams may work in isolation, the exercise can prove rich as interests collide and the complexity of neighbourhood upgrading reveals itself.

Step 1: Facilitators organise a public event of up to 50 persons in a public area. Facilitators give a brief overview of the aims and approaches of the game. It is emphasised, here, as being only a game and that the resulting plan will not be directly implemented.

Step 2: Individual elements from the kit are introduced and discussed. Alternatives may be shown here with their advantages and disadvantages discussed.

Step 3: Facilitators encourage conversation by asking specific questions and questioning the decisions with ‘real life scenarios’. Eventually a model can be finalised through dismissing elements and promoting others.

Step 5: Following this, facilitators should organise follow up ‘games’ that only invite those groups not represented in the prior meeting.

Step 6: The ‘game’ results should be cross examined for significant elements and this given priority.

Notes for facilitators: Facilitators should be aware that some groups are not represented in public discussions and should hold follow up sessions to give these groups opportunity to discuss their opinion, separately.